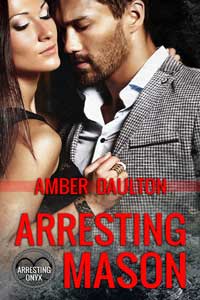 Age: 29
Gender: Male
Birthplace: Aurora, Colorado
Profession: Mechanic
Ethnicity: Caucasian
Please provide a physical description of yourself.
Mason has dark brown spiky hair, emerald-green eyes, and a tan from his job. He’s six feet tall, muscled and tattooed, and a few old scars cover his chest.
Please tell us a little about your character.
Mason made some foolish mistakes as a teenager, and then ended up in jail. Though he joined a prison gang, he gave it up after the State released him on parole. He’s doing his best stay out of trouble, but the people from his past aren’t ready to let him go.
Who is the significant other in your character’s life?
Mia Eddison is a feisty boutique owner who sees past Mason’s hard, cocky shell for the kind, vulnerable man he is inside.
How educated is this character? Is he book smart, self-taught, widely-experienced?
Mason dropped out of high school but earned his GED in prison. He used a lot of his spare time to read law books and literary classics in the prison library. Though he doesn’t have much formal education, he’s self-taught and highly intelligent.
What special skills does your character rely on?
Mason knows how to fight, and that comes in handy for him when he and Mia are in trouble.
What is your character’s family like?
Mason has an overprotective older brother, Alan, who is determined to make Mason walk a straight and narrow line. He has a young nephew who is absolutely adorable, and a former brother-in-law whom he considers a close friend. He’s not close with his parents, but Mia and Alan are trying to get him to reconcile with his mom.
Does this character see morality as black-and-white, or with shades of gray?
Shades of gray. He’s made too many mistakes and done too many bad things to see the world as straight forward as black-and-white.
How do others perceive your character based upon looks? How true is this assumption?
Most women find him hot and only care about the exterior packaging, and most men find him shady or dangerous. These assumptions are correct. Mason is one sexy man, and he’s hiding a bunch of secrets that could cost him his life. Deep down, however, he’s a good man and determined to do everything in his power to protect those he loves from his past.
Does your character care about those assumptions?
No. Mason doesn’t care what anyone thinks about him, except for Mia and his brother. He wants them to think of him as a good person.
What is your hero’s biggest personal flaw?
His temper. Mason gets angry way too quick and says things he regrets.
What is your hero’s breaking point?
Mason wants to live his life under the radar from cops and criminals alike, but when Mia’s life is threatened, he reverts to his old ways to save her. He would do anything for her, no matter the price to his own soul.

To honor the person who chose to share your story, please answer at least four of these questions. Questions with more than one point should be considered one question. You may answer as many more as you like.
Why do you think your writer chose to write about you?
Because I’m sexy. No, not buyin’ that? All right, well, let’s see. I think my writer, Amber, chose to write about me because everyone deserves a second chance at life and to right their wrongs. I’ve made mistakes, I’ll be the first to admit it, and Amber wanted to show my redemption. I can’t thank her enough for it.
What do you wish your writer had not told others about you?
That’s a loaded question. Though I like Amber a lot, she deserves a spanking for revealing all the crap I’ve been through, but the main thing I wish she would’ve kept just between us is the incident in the shower room. I was still in prison at the time, and a few pricks attacked me. Though I managed to fight them off before they got what they wanted from me, it was the most humiliating experience of my life, and not something I wanted blasted all over the Internet. But since you can read about it in my book, I guess I’m all right with telling ya about it here.
When your writer is writing about you, what do you think makes your writer the most happy? What makes your writer the most sad?
Amber loves writing about me and Mia, either when we’re in the bedroom or just having dinner together. She’s a hopeless romantic. Each time she would write about my past, however, she would cry a little, and I know it hurt her to share my secrets.
What other character from your book do you think your writer should write a book about? Care to tell us why?
Jim Borden, Mia’s arrogant brother and my parole officer, needs a lady love to knock him down a few pegs, and I would love to read that story! My brother, Alan, deserves a story too. He’s raising his son alone after his ex-wife skipped town, and I would do anything to see Alan happy with a good woman at his side.
Listen up, and I’ll let you in on a little secret. Amber is one smart cookie, and she’s already hard at work editing Jim’s and Alan’s stories. Just wait. They’re going to be great!

Tell us about Arresting Mason

Writing is the fruit of happiness.
Amber Daulton lives her life by that one belief even though she normally isn’t so Zen.
As a fan of contemporary, paranormal, and historical romance novels alike, she can’t get enough of feisty heroines and alpha heroes. Her mind is a wonderland of adventure, laughter, and awesome ways of kicking a guy when he’s down. She probably wouldn’t be too sane without her computer and notebooks. After all, what’s a girl to do when people are jabbering away in her head and it’s hard to shut them up? Write! Nothing else works.
Blog http://amberdaultonauthor.blogspot.com/
Twitter https://twitter.com/AmberDaulton1
Facebook www.facebook.com/amber.daulton.author
Pinterest http://pinterest.com/amberdaulton5/
Goodreads www.goodreads.com/author/show/6624921.Amber_Daulton
Amazon Author Page http://amzn.to/14JoZff