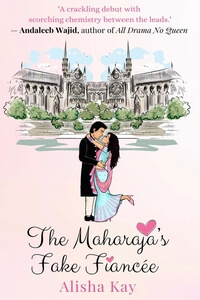 A Maharaja and an actress fake an engagement in Alisha Kay’s newest romcom, The Maharaja’s Fake Fiancée. But when the lines between fake and real begin to blur, will they let long-held prejudices keep them apart?

Alisha, welcome to Romance Lives Forever. I’m Kayelle Allen, author and owner of this blog. Happy to have you here! We’re excited to find out more about your hero, but first, tell us about The Maharaja’s Fake Fiancée.

What do you get when you throw them together and add a fake engagement to the mix?

Either a match made-in-heaven or a royal disaster.

Nivy Sharma knows exactly what she needs – the freedom to be herself and follow her passion. Guess what she doesn’t need? A tailor-made husband.

When her meddlesome mother tries to throw her into the arms of a mom-approved suitor, Nivy runs the other way.

Right into the arms of the man who shattered her heart five years ago.

His Highness Veerendra Singh can recognize a pain-in-the-ass when he sees it. Especially when it falls into his arms.

Even if said pain-in-the-ass has legs that go on forever and lush lips that just beg to be kissed, Veer vows to run the other way. As he did once before.

But, when the marriage-minded princess of Tejpur sets her sights on him, Veer runs back into Nivy’s arms to propose a fake engagement.

When ‘fake’ starts to feel very real, Nivy and Veer have to decide what is important – long-held prejudices or the chance for a life with the only person they’ve ever loved.

Will this be their second chance at love or will their broken past ruin their hope for a shared future?

Know the Hero from The Maharaja’s Fake Fiancée

Veer is a gamer. So, if he’s bored, he’s most likely shooting up bad guys or wrecking super cars on his phone.

A Maharaja Mac burger, and a cup of filter coffee strong enough to melt an engine.

Jeans and a t-shirt.

He tried to date a fellow royal, Princess Anika Dogra. That was a disaster because Veer has no interest in spoilt princesses.

He treats them as if they are adults.

Grumpy until he has his first cup of coffee.

Can he use chopsticks?

He loves strong coffee, with a dash of milk. No sugar.

A gold earring that has been passed down for generations in his family. The earring that every Maharaja of Devgarh has worn on formal occasions.

He has a fleet of cars, but he’s really attached to his souped-up Harley Davidson.

Recycle, because that is part of the Indian way of life.

Where to buy The Maharaja’s Fake Fiancée

Alisha Kay is a Delhi-based writer, who writes funny and passionate Indian romances novels.
She doesn’t hold with the concept of damsel-in-distress, which is why her heroines are spunky women with a sharp tongue and the ability to rescue themselves.
Her heroes are hot men who are woke enough to find that independence irresistible.
The Maharaja’s Fake Fiancée is Alisha’s first book.
Website https://alishakayauthor.wordpress.com
Twitter https://twitter.com/alishakayauthor
Instagram https://www.instagram.com/alishakayauthor/
Goodreads https://www.goodreads.com/author/show/21250111.Alisha_Kay