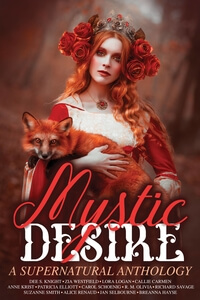 Welcome Aaron Wolfsbane from The Sweetest Magic of All, a new paranormal romance short story from the Mystic Desire BVS anthology.

Please provide a physical description of the character.
Tall, fit, with tousled black hair. His eyes are as green and limpid as the water in a woodland brook. A tanned, handsome face, with a straight nose and strong jaw.

Please tell us a little about your character.
Aaron is a time-travelling warlock who has just come back from the 17th century. He has come to Wales to find out if there are still sea witches left, and if their old magic still works.

Who is the significant other in your character’s life?
He meets the love of his life, Sapphire, in the story. Sapphire is the last in a long line of sea witches… but she’s only an apprentice sorceress, and she’s having trouble with her spells.

How does your hero dress?

Aaron moves between the 17th and the 21st century. When in the 17th century, he dresses like a gentleman of the time: black doublet and breeches, riding boots, and in winter, a cloak. In the 21st century he wears clothes suitable for a teacher, as that’s his day job: smart-casual shirts and trousers, or jeans and T-shirts when not working. Like all warlocks, he favours black.

How educated is this character? Is he book smart, self-taught, widely-experienced?

Aaron teaches English literature. He is very well read and very knowledgeable about Shakespeare – which isn’t surprising, as he knows the man and drinks with him regularly.

What special skills does your character rely on?

His magical skills, which include light healing, finding lost objects, and time travel. His specialty however is seeing what is in men’s – and women’s – hearts. He can see into your very soul.

Aaron is the son of a medieval witch, Alys Wolfsbane, also known as Alys the Dark, who ran away from her abusive husband and escaped into the 21st century. Unfortunately she had to leave her baby son behind – Auric, Aaron’s elder brother. In the 21st century, Alys met Aaron’s father, and gave birth to Aaron. They were happy for a while, until one day she disappeared. She reappeared the following evening. She looked ten years older, and she had a little boy with her – Ariel, Aaron’s younger brother. It turned out that she had been abducted by the Faeries, and spent years in Faerieland. Ariel is half-Fae. So Aaron has a rather unusual family!

He would like to see his mother again. After her mysterious disappearance and return, she and Aaron’s father tried to rekindle their relationship, but Aaron’s father couldn’t get over the fact that she was 10 years older and had had a son by another man. Eventually she went away for good, taking Aaron’s brother, Ariel, with her. Ariel returned years later, but she didn’t. Ariel told Aaron that she had gone back to Faerieland, for good. Aaron still loves his mum, but is angry with her for abandoning him. They have unresolved issues!

What is your hero’s biggest hopes and dreams?

To settle down, with someone who will love him as he is, and never leave him.

I’m a time-travelling warlock, and I have an unusual family background, so I guess I have an interesting story to tell.

Why do you think your writer loves to write?

I think she loves to spend time with us, away from her work and family duties. We help her to relax and forget her worries.

What other character from your book do you think your writer should write a book about? Care to tell us why?

I think she should write books about my brothers, Auric and Ariel. They’re very interesting guys. Auric is a medieval monk who uses his magical skills to fight demons. Ariel, with his Fae blood, is the most powerful warlock in England, and all the women fall under his spell.

Is there anything you’d like to say to your writer?

Don’t give up. Keep writing.

Tell us about The Sweetest Magic of All, from the Mystic Desire anthology by BVS

The Sweetest Magic of All

When a sexy apprentice witch and a hot warlock go back in time to locate a magical amulet, they find more than they bargained for. It’s May Eve, the most magical night of the year, and normal rules don’t apply…

Mystic Desire: A collection of sexy supernatural stories by talented BVS authors! As well as The Sweetest Magic of All, you can enjoy other knee-trembling tales, including:

Only two things stand between evil and a small girl: the visions of Amanda McMasters and Detective Brendan Gilchrist. Neither can afford to be wrong.

The Witch, Alice Humphreys, has poured her heart and soul into creating a magical B&B where guests experience the fantasy vacation of their dreams! Brodie MacEwan has been sent to investigate the mysterious death of his uncle. He never expected to discover his soul mate in his dreams. But is the illusion real? Alice knows that there is something all too predatory about the Scotsman and he makes her body tingle in places it shouldn’t!

Elijah Baker, an immortal tasked with fighting against demons that exist on earth, finds peace when he meets his new neighbor, Celeste. But when he realizes that their love comes with a cost, he is faced with choosing between his calling and a chance at true love.

Long ago, a medicine man had made a matched set of dream catchers as a wedding gift to protect the Chief’s daughter and her warrior husband. He had called upon the benevolent spirits to keep the two soul mates safe and in a loving, healthy marriage. It was foretold that if the two dream catchers were ever divided the new owners would be drawn together as soul mates. Was that possible?

Saving lives isn’t just for adults. Sometimes the innocent magic of a child can do the job better.

Love from the Mist – Patricia Elliott

When Jace Warden learns that his brother plans to announce his engagement at a family get together, he flees to the other side of the world to escape the joyous celebration.

Or at least attempts to… His plane never makes it, and he winds up trapped on an island. Little does he realize, he’s not alone; there’s a mischievous little entity milling about, and she wants to play.

Getting stranded in the middle of a storm was not Samantha Wheeler’s idea of an ideal situation, especially in the middle of a zombie apocalypse. But fighting zombies was the easy part; her heart, though, was a whole other matter. Thanks to a man named Steve Jones.

When they find themselves in danger, she has to decide what’s more important – dying for someone you love or surviving.

On the outskirts of a small town where nothing grows, a young girl, Ianthee, is being bullied and accused of being a witch. Young Caleb, inexplicably drawn to Ianthee, comes to her rescue. Before they can explore their feelings, Caleb and his family disappear. What happened to him, and what part does a long-ago legend play in their lives?

“Sorry, babe. I know it hurts to hear.” John frowned. I’ll make this brief. I spoke to the man in charge and he is giving me one last chance.”

A cruel twist of fate wrenched Evelyn and Peter apart on their wedding anniversary. Evelyn’s life descends into darkness. James enters her life giving her a chance of happiness. Evelyn discovers a piece of jewelry, that has the power to grant her time with Peter on their anniversary. She adores James, but needs Peter. Can she ever really let Peter go, while there’s still a chance they can be together?

Remy enjoys life as a vampire, never giving a thought to sucking every last drop of tasty blood out of his unfortunate victims and leaving them door nail dead. But his cold and carefree existence changes the day he crosses paths with the beautiful and mysterious mortal Angela.

Through the Veil – Jan Selbourne

A beautiful March day in 1875 ends in tragedy when the wagon carrying Helen and Marcus plunges down the mountainside. Generations pass before Rachel Finlay finds an old sepia photo of a man and woman. She knows them but she’s never met them and now, for the peace of mind she desperately craves, she goes back to where it began. In time, through the veil, knowing she may never return.

The massive, hideous merrow leader, Muruch, craves the taste of human flesh. Confined to the ocean, he feeds his horde with sailors from ships pulled into the maw of the Bermuda Triangle. When US Army Captain, Nurys Shaye, puts her life on the line to save him after being captured, his hunger for human flesh is shadowed by the desire for her body and her love. Will she be able to see past his appearance and trust him to break down her walls and teach her to feel?

Where to buy Mystic Desire

Alice was born and brought up in Brittany, Western France, her father was French and her mother British (from Wales). She moved to London, UK, in 1997, where she now lives with her husband and son. She works full time as a compliance specialist in a pharmaceutical company. She has been writing in her free time since she was 14. She got quite a few short stories published in UK magazines, before moving to longer fiction. She wrote three contemporary romance books, but didn’t find a publisher for them. She then realized that mermen, sea witches, and time travelling warlocks were a lot more fun than sheikhs and billionaires! Her first two paranormal romances did not find a publisher either, then she wrote A Merman’s Choice, which was published in January this year by Black Velvet Seductions. It is the first book in the Sea of Love series, a fantasy romance trilogy inspired by the landscapes and legends of Brittany and Wales. The second book in the series, Music for a Merman, will be out later this year. She loves reading and writing stories, and sharing them with anyone who’s interested!
Twitter https://twitter.com/alicerauthor
Facebook https://www.facebook.com/AliceRenaudAuthorRomance/
Goodreads https://www.goodreads.com/author/show/18670218.Alice_Renaud
Amazon Author Page https://www.amazon.co.uk/l/B07L52P17B