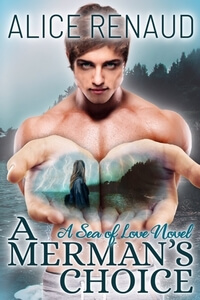 Age: 23
Gender: Male
Birthplace: Benetynn, one of the Morvann Islands, off the coast of West Wales (UK)
Profession: Nature warden. Sometimes also ferries tourists to and from the islands, on his boat Gwilan.
Ethnicity: In human shape, white
Species (for scifi/fantasy characters): Shape-shifting merman.
Please provide a physical description of the character.
In his merman, or aquatic, shape, Yann has dark grey skin and webbed hands and feet. Oh, and a foot-long, flexible tail. But not a fish tail! Mermen are one hundred per cent hot-blooded mammals. In human shape he’s a big, muscular guy. He has a young, handsome face, with a straight nose and square chin, crowned by a mop of glossy chestnut curls. He also has striking emerald-green eyes.
Please tell us a little about your character.
Yann is caring, kind, loyal and brave. He defies the laws of his Clan to save humans from drowning. His love for Alex brings him in conflict with his people, but he risks all to protect her. In the end he realizes that his own happiness matters, and he sacrifices his right to lead his Clan in order to marry Alex. A big guy, with a big heart!
Who is the significant other in your character’s life?
His human love interest, Alex. She’s the light of his life.
What special skills does your character rely on?
Yann is a shape shifting merman, he can move between the human world and the sea world. In aquatic shape, he can talk to sea mammals, taste every current through the membranes of his nose, and hear the song of a humpback whale from a hundred miles away. He can swim as well as any dolphin, and stay underwater for as long as a pilot whale. Like them he uses echolocation to orientate himself, and communicate at a distance with other mermen. He can also compose songs, in the mermen language of musical clicks and whistles. In human shape he’s a great sailor, and a fantastic swimmer.
What does he have a knack for doing?
He has a knack for annoying other mermen by spending too much time with humans, and in human shape. Also he keeps rescuing humans – even when doing so risks revealing his true nature. The mermen live incognito alongside humans and won’t allow any human to know the truth about them.
What is your character’s family like?
Yann lost his mother when he was young. He was brought up by his father, Bryn. Bryn is caring, but stern. He expects Yann to follow in his footsteps and become leader after him. That means he has to behave like a proper merman, and marry a nice mermaid who can help him lead the Benetynn Clan.
What past event causes your character the most fear?
Yann’s mum died whilst rescuing a human swimmer who had got into difficulty. When Yann was 12, another swimmer got into trouble near his island. He wanted to save her, but his father wouldn’t let him, for fear Yann would die too – or reveal his true nature to a human. Yann had to watch the woman die, knowing he could have saved her. After that, he promised himself that he would never again let a human drown. His biggest fear is breaking that promise. He will risk his own life, and his Clan’s anger, to rescue humans.
If your character could make any one thing happen, what would it be?
Yann would love mermen to live openly among humans, so he’d no longer have to hide his true self. In the distant past, mermen and humans lived side by side and intermarried, but centuries ago mermen decided to stay away from humans as much as possible and keep themselves to themselves. It’s a source of regret for Yann. He thinks that his people’s secrecy comes at a heavy price.

To honor the person who chose to share your story, please answer at least four of these questions. Questions with more than one point should be considered one question. You may answer as many more as you like.
Why do you think your writer chose to write about you?
I guess I have a pretty unusual story. I’m the first merman in centuries to marry a human. My writer loves Wales and Brittany, and their legends, so she’s always been drawn to the stories of us mermen and our world.
Why do you think your writer loves to write?
I think she loves to escape from her everyday life and spend time with us. We have exciting tales to tell, and it’s more fun for her than working in an office, I guess.
What other character from your book do you think your writer should write a book about? Care to tell us why?
I know she’s already written about my mate Rob, and his spunky girlfriend Charlie, so I’d like her to write a book about my best friend, Caltha. She’s been really helpful to me and Alex, so it would be great if she too could find love. Though I’m not sure what kind of man would be man enough for Caltha. She’s one feisty mermaid, and she’s devoted to the Clans. It would take magic to convince her to let her hair down a little, and allow herself to be loved and cared for.
Is there anything you’d like to say to your writer?
Thanks for giving me such a lovely wife. I wish you hadn’t made it so hard! But hey, it’s all good now.

Where to buy A Merman’s Choice by Alice Renaud

For centuries the shape-shifting mermen of the Morvann Islands have lived incognito among humans. But one of them, Yann, has developed some bad habits. Like rescuing humans, even when doing so risks revealing his true nature. When he fishes Alex out of the sea, he doesn’t expect her to reappear eight months later, and turn his life upside down by asking him to be her guide.
Alex is determined to fulfil a promise to her dying grandmother, by gathering pictures and stories of the Morvanns. But she soon discovers that, on these remote Welsh islands, legends have a habit of becoming true!
Over the course of a few days, Yann and Alex grow close. But some mermen hate humans. Their hostility, and Yann’s secret, threaten to tear the couple apart just as they are discovering that they are soul mates. Can Yann overcome the obstacles in his path and make the right choice?
Publisher Black Velvet Seductions http://www.blackvelvetseductions.com
Amazon https://amzn.to/2QglyeI
Kobo https://books2read.com/u/31xw7a

Alice was born and brought up in Brittany, Western France, her father was French and her mother British (from Wales). She moved to London, UK, in 1997, where she now lives with her husband and son. She works full time as a compliance specialist in a pharmaceutical company. She has been writing in her free time since she was 14. She got quite a few short stories published in UK magazines, before moving to longer fiction. She wrote three contemporary romance books, but didn’t find a publisher for them. She then realized that mermen, sea witches, and time travelling warlocks were a lot more fun than sheikhs and billionaires! Her first two paranormal romances did not find a publisher either, then she wrote A Merman’s Choice, which was published in January this year by Black Velvet Seductions. It is the first book in the Sea of Love series, a fantasy romance trilogy inspired by the landscapes and legends of Brittany and Wales. The second book in the series, Music for a Merman, will be out later this year. She loves reading and writing stories, and sharing them with anyone who’s interested!
Twitter https://twitter.com/alicerauthor
Facebook https://www.facebook.com/AliceRenaudAuthorRomance/
Goodreads https://www.goodreads.com/author/show/18670218.Alice_Renaud
Amazon Author Page https://www.amazon.co.uk/l/B07L52P17B