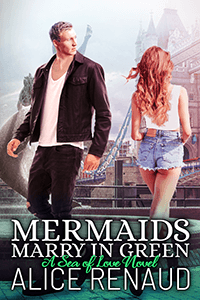 In Mermaids Marry in Green, a fantasy romance by Alice Renaud, a feisty shape shifting mermaid teams up with a warlock to capture a water monster who is threatening to flood London. They soon begin to fall for each other, but will her people accept a warlock as her mate? Will his troubled past tear them apart?

Alice, welcome to Romance Lives Forever. I’m Kayelle Allen, author and owner of this blog. Happy to have you here! We’re excited to find out more about your hero, but first, tell us about Mermaids Marry in Green.

Caltha Dooran is the toughest, fiercest shape-shifting mermaid in the western seas. She has three Clans to rule, and no time for romance. But when a warlock, Jonty, turns up and asks her to come with him to London to capture a water monster, she can’t say no. In London, away from her duties, her attraction for Jonty grows… and they soon fall under each other’s spell. But will his past and her responsibilities pull them apart, or can they find the only true magic, the one that binds two souls together?

Know the Hero, Jonty, from Mermaids Marry in Green

In the past, he would have cast some spells to pass the time, perhaps conjured up a spirit in the shape of a talking animal to have a chat. But now he has given up magic, so he’d probably go for a walk in the dark.

Burger and chips. He grew up on a farm and loves red meat, but only if it comes from animals who have been well treated.

Battered leather trousers and jacket, T-shirt, boots. Tough, workaday clothes, that won’t show dirt or blood. Being a warlock, even a retired one, can be a messy business.

Yes. In the past he would use magic, but he can fix many things even without spells… except his life.

He challenged a trio of hags to impress the woman he loved. It went wrong, the hags killed and ate her. He has lived with the guilt ever since.

He loves children and is comfortable around them. He’ll play with them and teach them stuff.

Like most warlocks and witches he’s a creature of the night, but being a hunter he’s trained to get up early to catch monsters… or round up the sheep on his parents’ estate.

Warlocks hide their powers from ordinary humans. He will act natural, but will tell people as little as possible about himself.

He’ll do it himself. He hates it when he is unable to do something and has to get another man to do it.

No ornaments or tattoos for him – warlocks shouldn’t draw attention to themselves.

Recycle! Warlocks and witches respect nature and would never litter.

Where to buy Mermaids Marry in Green

Alice lives in London, UK, with her husband and son. By day she’s a compliance manager for a pharmaceutical company. By night she writes fantasy romance about shape shifting mermen, water monsters and time-travelling witches. Her first book, “A Merman’s Choice,” was published in January 2019 by Black Velvet Seductions. It is the first book in a fantasy romance trilogy inspired by the landscapes and legends of Brittany and Wales. The second book in the series, “Music for a Merman,” and the third, “Mermaids Marry in Green,” are out now. Alice has also contributed short stories to the BVS anthologies “Mystic Desire” and “Desire Me Again”, both out now. Alice loves reading and writing stories, and sharing them with anyone who’s interested!
Website https://nomadauthors.com/alicerenaud/alicebooks.html
Twitter https://twitter.com/alicerauthor
Facebook https://www.facebook.com/AliceRenaudAuthorRomance/
Instagram https://www.instagram.com/alicerenaudauthor/
Goodreads https://www.goodreads.com/author/show/18670218.Alice_Renaud
BookBub https://www.bookbub.com/profile/alice-renaud
Amazon Author Page https://www.amazon.com/Alice-Renaud/e/B07L52P17B