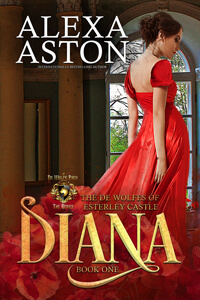 Alexa Aston, welcome to Romance Lives Forever. I’m Kayelle Allen, author and owner of this blog. Happy to have you here! Please tell us about your book.

Genre: Regency romance
Book heat level: PG-13
A woman whose reputation was destroyed. A powerful earl who longs for children. Can they ignore the raging gossip and find happiness together?
Lady Diana de Wolfe’s curiosity about kissing led to her ruin before she ever made her come-out in London. Banished from her home by a furious, disappointed father, Diana gives birth out of wedlock to twins and supports her family without help until her parents’ death. Her brother, the new Earl of Reston, welcomes her back into the family fold and takes Diana to London, hoping she can make a match—and demanding she keep silent about her children until she’s landed a husband.
Oliver Ward, Earl of Merrifield, raised his siblings after his father’s tragic death and his mother’s subsequent madness. With his brother at university and his sister making her come-out, Oliver is ready to find a wife and start a family of his own. His good friend, Lady Merrick, whom he almost wed, promises to help him find the right woman.
Meeting shortly before the London Season begins, Oliver is drawn to Diana’s spirit and beauty. Her attraction for him only grows when he learns about her precocious twins and he is determined to make her his.
Will the rumors regarding Diana’s past mistakes doom this couple in society’s eyes—or can love overcome gossip and save them both?
Diana occurs after the events written about in Alexa Aston’s bestselling St. Clairs Trilogy—Devoted to the Duke; Midnight with the Marquess; and Embraced by the Earl—and is a part of the De Wolfe Pack Connected World.
*Look for Derek August 24 and Thea September 28, where Diana’s siblings find their own HEAs.
Why did you write this book?
I had created a lovely, wonderful man named Lord Merrifield in Midnight with the Marquess. He also appeared in Embracing the Earl. I hated that Merrifield was this terrific man who hadn’t gotten his own HEA—so I came up with Diana de Wolfe for him!
What is your favorite genre to read?
I enjoy reading thrillers most of all. Just finished The New Girl by Daniel Silva and highly recommend it!
Who is your favorite character from fiction (not including your own)?
I usually say Elizabeth Bennet but today I’m going with Gabriel Allon.
What are you working on at the moment?
My St. Clairs were meant to be a trilogy, but reader response has been so great that I am writing Books 4 & 5. They will finish up the series and come out this fall.
What books will we see from you in coming months?
I have two novellas releasing soon. Derek (The de Wolfes of Esterley Castle Book 2) and Thea (The de Wolfes of Esterley Castle Book 3) come out August 24 and September 28, respectively. While they can be read as standalones, I think it’s fun to read all three of these novellas together. And don’t be surprised if you see a few St. Clairs pop up in this trilogy!

Alexa Aston is the author of Medieval and Regency romance, including her 10-book series The Knights of Honor, which takes place in 14th century England and centers on the de Montfort family. Each standalone romance focuses on the code of chivalry that bound knights of this era.
A native Texan, Alexa lives with her husband in a Dallas suburb, where she eats her fair share of dark chocolate and plots out stories while she walks every morning. She enjoys reading, Netflix binge-watching, and can’t get enough of Survivor or Game of Thrones.
Website https://alexaaston.com/
Twitter https://twitter.com/AlexaAston
Facebook https://www.facebook.com/authoralexaaston/
Goodreads https://www.goodreads.com/author/show/15846438.Alexa_Aston
Amazon Author Page https://www.amazon.com/author/alexaaston
Newsletter http://madmimi.com/signups/422152/join