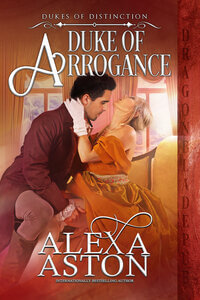 Can a bluestocking with a quick wit tame the disreputable Duke of Arrogance—and save his soul? Try Alexa Aston's newest Regency romance, Duke of Arrogance, from the Dukes of Distinction series.

Alexa, welcome to Romance Lives Forever. I'm Kayelle Allen, author and owner of this blog. Happy to have you here! Please tell us about Duke of Arrogance.

Duke of Arrogance by Alexa Aston

A woman spurned by the ton...

A duke harboring an appalling secret...

Life radically changes for Arabella Jennings, the daughter of an Oxford don, when her father becomes the Earl of Barrington. She’s an intellectual who would rather be discussing Shakespeare’s works but now finds herself navigating the vicious waters of Polite Society.

Jonathan Sutton’s twin dies, making him the new Duke of Blackmore. Pledging to live for both himself and Arch, Jon becomes one of London’s leading rakes, breaking rules and bedding women as his brother would have done had he lived.

Jon meets Arabella the first night of the Season and decides this woman, so different from every conquest he’s made, might help him from the abyss he’s sunk into.

Can a bluestocking with a quick wit tame the disreputable Duke of Arrogance—and save his soul?

Find the answer in The Duke of Arrogance, Book 4 in the Dukes of Distinction.

*Each book in Dukes of Distinction is a standalone story that can be enjoyed out of order and can be read for free in Kindle Unlimited.

Where to buy Duke of Arrogance

Award-winning and internationally bestselling author Alexa Aston lives with her husband in a Dallas suburb, where she eats her fair share of dark chocolate and plots out stories while she walks every morning. She's a binge fiend (The Crown and Ozark are favorites) who enjoys travel, sports, and time with her family.
Her historical romances bring to life loveable rogues and dashing knights, while her contemporary romances are light and flirty and sometimes contain a bit of suspense.
Website https://alexaaston.com
Twitter https://twitter.com/AlexaAston
Facebook https://www.facebook.com/authoralexaaston/
Instagram Https://www.instagram.com/authoralexaaston/
Goodreads https://goodreads.com/author/show/15846438.Alexa_Aston
BookBub https://www.bookbub.com/authors/alexa-aston
Amazon Author Page https://www.amazon.com/author/alexaaston
Get to know Alexa Aston better by signing up for an email newsletter http://madmimi.com/signups/422152/join