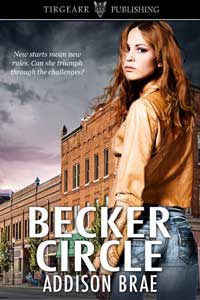 Addison Brae, welcome to Romance Lives Forever. I’m Kayelle Allen, author and owner of this blog. Happy to have you here! We’re excited to find out more about your hero, but first, tell us about the book.

Genre: Contemporary Romantic Suspense
Book heat level (based on movie ratings): R
Gillian’s first and only boyfriend believed she was too gutless to leave. He was dead wrong. Gillian graduated Harvard early and left his hot temper and everyone else behind for Dallas. Determined to make it on her own, she lands a second job bartending at the neighborhood pub smack in drama central where most every jerk in the neighborhood hits on her—at a huge price.
A week into the job, the neighborhood’s very popular drug dealer falls to his death a few feet from the table she’s serving. The cops say suicide, but Gillian and Jon, the hot guitar player in the house band, suspect foul play, and she intends to prove it. They dig deeper, grow closer, and make a shocking discovery. They know the murderer. Watch the trailer https://youtu.be/Mf-GlfxPzdY.

Know the Hero from Becker Circle

Here are some fun questions to help us know your hero.
It’s late, Jon’s bored. What does he do?
Typically Jon walks down the street to the George & Dragon where he always finds a cold beer, good food, and someone he knows. If he feels creative, he stays home, picks up his guitar, and writes a new song.
What kind of food would he impulse buy if hungry?
Jon’s not picky about what type of food, but he is picky about how it’s prepared. As a bit of a chef himself, burgers have to be lean with pink in the middle and Italian dishes must be at least nearly as good as his grandmother makes. He’s always prepared to cook a gourmet breakfast.
Describe the kind of clothes he prefers to wear.
Jon’s best feature is the way he pulls off a look like he rolled out of bed and threw on a shirt, messy hair and all. His olive complexion and straight brown hair comes from his dad’s Italian roots. He’s in tee-shirts, sweatshirts, jeans, whatever’s comfortable—whether working with clients or onstage. Jon’s not picky about what he looks like as long as his clothes are clean and fit right.
Does he know how to fix things?
Jon’s talent is diffusing trouble at the bar before it gets out of hand and rescuing his friends when they’re in a bind. For anything else, he calls his apartment maintenance.
He tried to do something and it went badly. Tell us about it.
Jon watches his new friend, Gillian, dig a little too deep into the drug world to prove the man they saw die did not take his own life. They agree to work together but despite his warnings, she impulsively acts on clues. She doesn’t understand that her life is at stake. Sharing more will give away too much.
How does he act around children he doesn’t know?
He owns his own web design business, plays in a band, and lives in a community full of single people. The only kids Jon sees are those who stay with their parents on the weekends in the apartment community.
What is he like first thing in the morning?
Jon pulls off a very sexy just-rolled-out-of-bed look with tussled hair and a slightly wrinkled tee-shirt all the time without trying.
Can he use chopsticks?
Jon can use chopsticks in a crunch. He’d choose pizza, manicotti, or any Italian food over Asian most of the time.
Does he drink coffee? If so, how does he take it? If not, what does he drink instead?
Jon enjoys a large coffee with half-and-half in the morning, another thing he and Gillian have in common.
What apps would he have on his phone?
For Jon’s music life, he uses a metronome, tuner, all the music apps, and ride services to call for his friends when they’re in a bind. For work, he has website building apps as well as those for illustrating, editing photos, image sources, and file share for work and gig set lists.
Android or iPhone?
Android
Beard or clean-shaven?
Facial hair makes him itch.
Earrings/piercings/tattoos or unadorned skin?
His dad was a cop and encouraged him not to go the pierce or tattoo route. When his dad was killed in the line of duty, Jon promised himself he never would.
Personal vehicle or public transport?
Jon’s usually loaded down with guitars and amps, which doesn’t work well with trains and buses. He drives a red pickup truck with a treasured blue bandana hanging from the rearview. One of the Eagles band members threw it off the stage at a concert he went to with his dad.
Recycle or toss?
Toss. In the apartment living world, recycling isn’t available.
Thanks for helping us get to know your hero!

Where to buy Becker Circle

Addison Brae lives in Dallas, Texas on the edge of downtown. As a child, she was constantly in trouble for hiding under the bed to read when she was supposed to be napping. She has been writing since childhood starting with diaries, letters and short stories. She continues today with articles, video scripts and other content as an independent marketing consultant. When she’s not writing, Addison spends her time traveling the world, collecting interesting cocktail recipes and hosting parties. She’s still addicted to reading and enjoys jogging in her neighborhood park, sipping red wine, binge-watching TV series, vintage clothing and hanging out with her artistic other half and their neurotic cat Lucy.
Website http://addisonbrae.com
Blog http://addisonbrae.com/blog
Twitter https://twitter.com/AddisonBrae1
Facebook https://www.facebook.com/addison.brae
Instagram https://www.instagram.com/addisonbraeauthor/
Goodreads https://www.goodreads.com/author/show/17759692.Addison_Brae
BookBub https://www.bookbub.com/authors/addison-brae
Amazon Author Page https://www.amazon.com/default/e/B07B443K8P/
YouTube https://www.youtube.com/channel/UCreHrv1bBNdyHm5skgqNR-Q