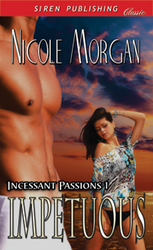 Title: Impetuous (Incessant Passions 1)
Genre: Erotic Contemporary
Author: Nicole Morgan
Book heat level: R
The Callaway Corporation recently bought the high-end resort property Jenny Jacobson manages. In that time, they have micromanaged both her and it into the ground. With no budget for repairs, she does most of the work herself. She proves to be pretty handy with most of the daily mishaps, until she meets the mysterious drifter Thomas Beck.
In the middle of a plumbing emergency, Beck comes to her rescue and fixes the problem, saving her from further disaster and costly repairs. Despite her best attempts, she cannot seem to get away from this man who shows up at every turn.
Regardless of her cold treatment toward him, he turns on his charms. Will his cocky arrogance mixed with his sexy smile break down her tough exterior? If so, what secrets is Beck keeping that could ultimately ruin any chance they have to find happiness together? 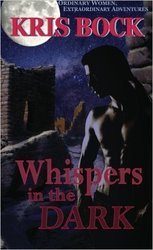 Today’s featured book is Whispers in the Dark by
Kris Bock.

Title Whispers in the Dark
Genre romantic suspense
Author Kris Bock
Book heat level (based on movie ratings): PG
Whispers in the
Dark: Archaeology student Kylie Hafford craves adventure when she heads
to the remote Puebloan ruins of Lost Valley, Colorado, to excavate. Romance
isn’t in her plans, but she soon meets two sexy men: Danesh looks like a
warrior from the Pueblo’s ancient past, and Sean is a charming, playful
tourist. The summer heats up as Kylie uncovers mysteries, secrets, and terrors
in the dark. She’ll need all her strength and wits to survive—and to
save the man she’s come to love.
Whispers in the Dark, romantic suspense set in the Four Corners region of the Southwest,
will appeal to fans of Mary Stewart, Barbara Michaels, and Terry Odell.
Reviewers give it a
4.3 star average: “A great read with a strong plot line and likeable characters!”
“This book kept me
turning pages until the end. The plot was full of twists and turns, always
keeping the reader rooting for the heroine. Excellent read!”

Kris Bock writes novels of suspense and romance involving
outdoor adventures and Southwestern landscapes. In Counterfeits, stolen
Rembrandt paintings bring danger to a small New Mexico town. Whispers in the
Dark features archaeology and intrigue among ancient Southwest ruins. What We
Found is a mystery with strong romantic elements about a young woman who finds
a murder victim in the woods. The Mad Monk’s Treasure follows the hunt for a
long-lost treasure in the New Mexico desert. In The Dead Man’s Treasure,
estranged relatives compete to reach a buried treasure by following a series of
complex clues. Read excerpts at www.krisbock.com
or visit her Amazon
page. Sign up for Kris Bock newsletter for
announcements of new books, sales, and more. 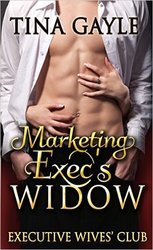 Title Marketing Exec’s Widow
Genre Contemporary romance with strong women fiction
elements
Author  Tina Gayle
Book heat level (based on movie ratings): PG
Letting go and rebuilding a life comes at a price.
Having come to terms with losing her husband, Jennifer is ready to move on with her life, but she faces opposition from her friends, in-laws, and brother-in-law, who see himself as her future husband. None of them know of Jen’s marital problems and she is afraid of their reaction when they learn she has a date for Friday night?
Hagan Chaney is not anything like Craig. He tempts Jen into the future but is she willing to give love another chance after the heartache she faced the 1st time around?

Best-selling author, Tina Gayle
grew up not knowing what she wanted to be as an adult. Then someone asked her
about my dream job, her answer, “I wanted to be a pretender.”
So the job of writing books is the perfect job for her. She has a vivid
imagination and enjoys creating new characters and heartbreaking situations
that her readers can sympathize with as they root for the couple’s love to
blossom.
Before setting down with her computer, she worked in the corporate world as
both an accountant and a programmer. Once her kids were born, she decided to
give her dream of being a writer a try and loves to incorporate the heartaches,
headaches and fun of being a mother and a woman into my books.
She is now working on finishing her Family Tree series…Summer’s Growth and
Fallen Leaves. (Paranormal Romantic Suspense) The last two Winter Wonders and
Spring Rebirth will come out in the next two years.
She also has been playing around with short stories that tell the problems a
number of Baby Boomers are experiencing.
When not writing, she enjoys spending time with my family and traveling around
the country. She hasn’t hit every state, but she hopes to someday. You might
also catch her on the golf course with her husband of 30 years.
Tina loves to
hear from her readers. What elements you liked and what you didn’t care for in
the story. You can read the first chapter of any of her books by visiting her
website.

Meet Blue Trace from Outside the Lines #romance @allyabishop #RLFblog 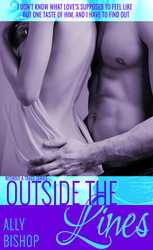 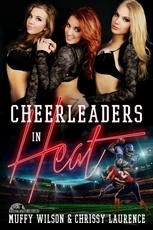 Muffy Wilson, author of provocative romance about love, sex, hope and passion, was born in Texas to traditional parents. With two older brothers, she was the youngest, the family “princess,” indulged and pampered. Her father was a career Colonel and pilot in the U.S. Air Force which required the family to travel extensively. Muffy spent her formative years in Europe and ‘came of age’ in France which forged her joie de vivre and love for books, writing and education.

Chrissy Laurence is the cousin of Best Selling mystery writer CKLaurence. Chrissy has always wanted to write, but until her dear friend Muffy encouraged her to do so, she kept the manuscript she had started tucked away without moving forward. Thrilled with the opportunity to collaborate, she forwarded her manuscript to Muffy. It turned out that the two women were a perfect team. Yours to read and enjoy–thoroughly!

One of my favorite mystery authors, C.K. Laurence (The Mystery of Jessica Benson) and I talked about collaborating on a book together. She wanted to dip her toe, so to speak, into the pool of erotica and erotic romance. We appreciated one another’s writing style and commitment to excellence and thought, if one is good—two is gonna be great! Chrissy (C.K.’s erotica pen name for her more sensitive mystery fans) had begun the outline and I started to work of fleshing out the story. I would finish a chapter and C.K. would edit and finalize the work. Worked like a charm and a year later—voila! We had Cheerleaders.

Perry Mason by Erle Stanley Gardner. I know, sounds ridiculous but when my father was stationed in France in the USAF, we did not have a television. I had just turned thirteen and because of the entire series, I developed an insatiable appetite for mysteries, reading, books of any kind. I spent was free tiem I had at the base library checking out books to read throughout the week. I read everything in criminology: fiction and non-fiction. For a long time I wanted to be a criminologist or a medical examiner. It really shaped my love of reading and knowledge.

What are you working on at the moment, and will see from you in coming months?

I just finished a 20,000 word story I titled Consenting Hearts for an anthology with 20 other well-known authors, Indulgence, sponsored by The Erotic Author’s Guild due out in February 2016. Right now, I am working on a labor of love, my father’s memoire titled, A Funny Thing Happened on the Way to the War: A Memoire of LtCol. Joe Lyle Jr USAF. My dad was one of the original Top Guns aka Tom Cruise in the early 1950’s and flew transport, fighters and helicopter aircraft from Alaska to France and Vietnam. He was a fine man, an officer and a gentleman and very patriotic, but like most of us, he had flaws, strengths and honor. I want his life to be memorialized for those that are his successors. He is the tenth in a long line of twelve generations of our family that have proudly served the United States of America in the military. After I finish that, I have two series to complete beginning with The Para-Portage of Emily (The Shadow Seduction Series) and Moonbeams of Unintended Consequences (Ribbons of Moonbeams Series) so I should be pretty busy this coming year.

NOTE: Although this novel is lighthearted, campy and full of laughter with an occasional tear and lots of sex, there is a chapter that deals with rage, drugs, rape and is extremely violent. This chapter is not meant to glorify aberrant non-consensual sex and/or drugs and violence in any way. It is a pivotal chapter that lives at point to give Cherie a reason to live, rather than be sucked further into the dark abyss into which she is sliding.

— Miami Rattlers Cheerleader Cherie Redd is exquisitely beautiful, athletic, and very, very lonely. Romance: a puzzling phenomenon she figured had something to do with guys’ fear of rejection or lack of self-confidence because they just didn’t have what it takes to win someone like Cherie.

Titillatingly sexy and breathtakingly beautiful, Cherie and her other cheerleading friends often spent their lonely Saturday nights lamenting their beauty and available just for the asking. The prettiest single women around: lonely, loveless and forlorn.

Follow Cherie and her friends as their sexual scoreboards light up brighter than in any stadium. Or does it? 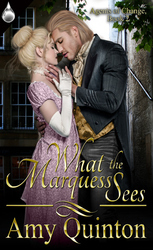 Cover Love includes a cover, blurb, buy links, and social
media contacts for the author. Today’s featured book is What the Marquess Sees
by Amy Quinton.

Title What the Marquess Sees
Genre Regency Romance
Author Amy Quinton
Book heat level (based on movie ratings): R
England 1814: He is a marquess
with a woman to protect and an assassin to thwart. She is…not nice.
The Marquess of Dansbury is a strong, charismatic man living
a charmed life as an agent for the crown. His past isn’t without tragedy, but
he is too amiable to allow misfortune to mar his positive outlook on life.
Until now…when he finds himself tasked with protecting the one woman in the
world he actively disdains, Lady Beatryce Beckett.
Lady Beatryce Beckett is mean. She ruins other women on
purpose. She lies. She cheats. She even steals. And she takes particular
pleasure in provoking a certain marquess. In short, she’ll do anything to get
what she wants: freedom from her abusive father. But she is strong (she’s had
to be), worthy (who’d have thought it), and in love… Wait, what?
It will take a special man to see the true woman beneath the
surface…and a strong woman to allow him that glimpse. Is the Marquess of
Dansbury up to the task?

Amy Quinton is an author and full time mom living in Summerville, SC. She enjoys writing (and reading!) sexy, historical romances. She lives with her husband, two boys, and one cat. In her spare time, she likes to go camping, hiking, and canoeing/kayaking… And did she mention reading? When she’s not reading, cleaning, or traveling, she likes to make jewelry, sew, knit, and crochet (Yay for Ravelry!).
https://amyquinton.net/