Posted on  11/30/2014 by Kayelle Allen
Denise Rossetti author of Mine to Keep answers five easy questions
to help readers get to know them better.

When Denise
Rossetti was very small, she had an aunt who would tell her the most wonderful fairy
tales all original. She grew up, as little girls do, but the magic of story still
dazzles and enthralls her. In person, she’s small and noisy and tends to wave her
hands around a lot, which can be unfortunate if the tale she’s telling happens to
have explosions in it!
Reviewers describe
Denise’s books as “darkly intense, warmly romantic, and blazingly erotic”.
She’s a proud recipient of the Australian Romance Readers Association award for
Best Erotic Romance and a two time winner of the Passionate Plume award from Romance
Writers of America.
What’s your favorite down-home
family style meal?
Anything my
husband cooks. He does all the cooking (and shopping) – and no, you can’t have him.
Heh, heh. The poor man learned how to cook in self-defense not long after we were
married and I’ve been grateful ever since. He does a fabulous lamb roast, the darling.
What is your go-to meal
when you dine out?
Anything I
can’t cook myself – which leaves the field wide open! I have such a shocking sweet
tooth that I generally turn the menu over and start with the desserts. Seems only
sensible to me!
Describe the perfect vacation.
I love learning
cool new things. My idea of heaven is to be somewhere that’s not only beautiful,
but interesting, with tour guides telling me fascinating stuff, making everything
come alive. Wonderful experiences every single day.
What are your hobbies?
Well, reading’s
a no-brainer. I’m also a knitter, have been since I was a kid. I’m currently obsessed
with knitting socks and also with learning maths. I’m much better at one than the
other – guess which!
If the hero of your latest
book called you on the phone, what would be a perfect ringtone for him?
Would I Lie
To You? (Eurythmics) Oh yeah, Peter totally would!

Title Mine to Keep
Genre Sexy Sci-Fi Romance
Author Denise Rossetti
Book heat level (based on movie ratings): R
He’s all puppy charm, but he smiles like a wolf. Trust him? She’d
have to be out of her mind.
All Sandy wanted
was some R&R in Sydney before joining the Earth Ship Siren as head of Military
Police. What she gets is a night of mystery and pleasure with a man so wickedly
fascinating he can’t possibly be law-abiding.
For professional
con man Peter Stanton, Master Sergeant Alanna Sanderson, with her kick-ass body
and cool blue eyes, is the most fun he’s ever had. Eight months later, on the Siren,
he gets to meet her again, but now he’s Prisoner 141, and they’re out among the
stars, half way to the penal colony on Solitaire.
When a micrometeroid
shower strikes the convoy, Sandy and Prisoner 141 are stranded on a stricken ship.
Will he pull off the ultimate confidence trick and sacrifice Sandy for his freedom?
If only she
could command her heart as easily as she wields her stun gun, because when he betrays
her, as he surely must, she’s going to have to kill him. 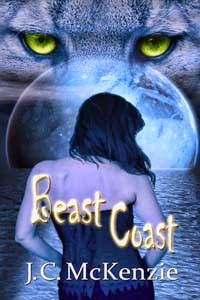 The signs in the zoos saying ‘Don’t Poke the Dangerous Animal’
never applied to Andy McNeilly.

Title: Beast Coast
Series Name: Carus Series, Book Two
Publisher: The Wild Rose Press
Editor: Lara Parker
Cover Artist: Debbie Taylor of DCA Graphics
Genre: Urban Fantasy/Paranormal
Book heat level (based on movie ratings): PG13
When Master Vampire Lucien Delgatto threatens her potential mate
Wick’s life, Shape Shifter Andrea “Andy” McNeilly will employ a den of
witches, a bedazzled thong, and her ability to shift into multiple animals to meet
his demands. She plans to keep Wick safe—even if she’s not speaking to him. Lucien’s
unwelcomed control over Wick’s life has thrown Andy into a whirlwind of emotions.
Though Wick vows to do whatever it takes to earn Andy’s forgiveness
and win back her trust, it may be too late. This recent conflict awakens something
within Andy, an animal she’s never learned to control. For hidden beneath all her
forms is a beast whose anger and brutality rivals none.
And she’s pissed.

Born and raised on the Haida Gwaii, off the West Coast of Canada,
J.C. McKenzie grew up in a pristine wilderness that inspired her to dream. She writes
Urban Fantasy and Paranormal Romance.

Posted on  11/28/2014 by Kayelle Allen
Kayelle Allen, author of A Romance for Christmas answers five
easy questions to help readers get to know her better. Kayelle is a best-selling, multi-published, award-winning
author. Her unstoppable heroes and heroines include contemporary every day folk,
role-playing immortal gamers, futuristic covert agents, and warriors who purr.
Who is your “book
boyfriend” (that hottie you read about and drool over)?
I have a real yen for Roarke, from JD Robb’s In Death series.
But don’t let Lt. Eve Dallas know. *wink*
What’s your favorite hashtag
to watch on Twitter?
I have more than one. I (try to) keep up with #Loki and #Thranduil,
and also #MFRWauthor #amreading and #ASMSG. I built a Paper.li newsletter that combines
the first two. Loki’s Army Recruiters http://paper.li/kayelleallen/1383533309
What are your hobbies?
I’ve been collecting the In Death series by JD Robb (39 as of
this date), and the Black Dagger Brotherhood series by JR Ward. Hmm… I must have
a thing for authors with J names and four-letter last names. Anyway, I challenged
myself to find these books secoond hand rather than new. So I visit used book stores,
Goodwill stores, and places like Second and Charles. I keep a list and cross them
off as I go. Once I have all the books, it’s only a matter of keeping up. And I’m
scouting for new and prolific authors to watch. Suggestions welcome.
What kinds of things do
you read when you’re researching a new book?
I just bought two Astonomy
magazines which I will read cover to cover. I also pick up Popular Science, Popular
Mechanics, and similar magazines. They help me keep up with current technology.
When you write science fiction you have to know what’s new. Scifi is often an extrapolation
built on the now. If we have this, what will it be used to do? The book I’m talking
about this time is contemporary — not scifi, but my primary writing is science
fiction romance.
If the hero of your latest
book called you on the phone, what would be a perfect ringtone for him?
The theme from Cops! “Bad boys, bad boys, what you gonna
do? What you gonna do when they come for you?” Scott Gregori is one of his
hometown’s finest boys in blue.

Title A Romance for Christmas
Genre Contemporary Holiday Romance
Author Kayelle Allen
Book heat level (based on movie ratings): PG13
A cop at the door on Christmas Eve brings an unexpected gift.
A sweet holiday romance
showcasing love, loss, and the spirit of giving.
It’s Christmas Eve, and the end of a year in which everything
Dara loves has been lost. Everything but her little girl and a fierce determination
to survive. When a cop brings Christmas to her door, he brings another gift she
never expected to get.

Peek inside the book: http://bit.ly/rom4cmaspeek

Posted on  11/27/2014 by Kayelle Allen
A fitting poem about luck and being thankful, just in time for Thanksgiving Day. Thank you to each of you who make Romance Lives Forever a wonderful place to be all year long.
Wishing you and yours a wonderful, safe holiday.
— Kayelle Allen

(author unknown)
Week before Thanksgiving,
I limp around real strange.
Huddle in the corner,
As though I have the mange.
All the other turkeys,
Just gobble, gobble on.
I’m silent, and I act
As if my gobbler’s gone.
Everyone is thankful
On Thanksgiving Day.
Friday it’s forgotten.
You all go on your way.
I know what thankful is
So listen when I say.
“It’s great to be a turkey,
After Thanksgiving Day.”

Lena will do anything to protect the shifter child her family
takes in, even turn herself into bait. Although she knows better than to fall for
a shifter, Devin, the man who captures her, is unlike any she’s ever tangled with.
Their desire is unquenchable and the draw to him is undeniable, but their relationship
is riddled with mistakes and loving him has the potential to destroy her.
After shouldering his twin’s torture, Devin hovers on the verge
of insanity. His life revolves around his family and recovering kidnapped shifter
children. He never thought he’d have a mate or kids of his own until a rescue mission
turns deadly. The beautiful female caught in the crosshairs stirs his mating instincts
and tames his wild nature. Only her confusion over their intense attraction stops
him from finishing their bond, but Devin’s persistent. He’ll convince his stubborn
female that he’s the man she’s been waiting for—one passionate encounter at a time.
Barnes and Noble
Publisher
KOBO
ARe
Google iTunes
AMAZON-UK_
AMAZON-CA
AMAZON-DE
AMAZON-AU

Centuries after what should have been a blessing from a goddess,
Mira has gone from the chosen daughter to a woman shamed. She’s found a tentative
peace among her family and the females they’ve chosen to mate. And despite the potentially
fatal consequences, Mira has found the one thing she never thought she’d have—love.
Josh is the only male she’s ever wanted, desired and burned for, and he’s the only
man she can never hope to keep.
One glance into Mira’s exotic feline eyes and Josh is lost. She’s
everything he never knew he wanted and loving her becomes a passion he can’t deny.
The obstacles keeping them apart seem insurmountable, but Josh knows he’s the man
Mira needs. With every passionate encounter, every stolen touch, his certainty that
he and Mira belong together grows. He’ll defy every shifter decree and fight to
his dying breath to convince those around them of the truth—Mira belongs to him,
mind, body and soul.
Barnes and Noble
Publisher
KOBO
ARe
Google
iTunes
AMAZON-UK
AMAZON-CA
AMAZON-DE
AMAZON-AU

Posted on  11/25/2014 by Kayelle Allen
Cover Love includes a cover, blurb, buy links, and social
media contacts for the author. Today’s featured book is Kaden’s Reprieve.
She needs a safe haven, he wants his freedom. Add a supernatural
matchmaker and an unexpected mentor, and their lives will never be the same.
Tanya has been running for her life for two years, but when Ms.
Lillian, owner of the exclusive “Heaven’s Touch” match making service,
graciously gives her a week’s stay at her private bed and breakfast in St. Augustine,
FL, she seizes the opportunity to escape to a possible hideaway.
Kaden is of a rare and precious race prized for extraordinary
abilities. He is also half-demon, remanded to Kushiel’s custody centuries ago. Allowed
leave from Hell twice a year, three days each time – Beltane, and Samhain, his life
thus far has been filled with slavery, torture, and despair, and he is nearly convinced
that his soul is beyond redemption. Still, he longs for freedom. Can Tanya redeem
him? Can Kaden dare hope for a reprieve?